For a second year, the MHJC Chinese Day Event was held during the NZ Chinese Language Week, celebrating Chinese language and culture. The event raised students interest in learning Chinese and about the culture – in line with the school’s goal – to foster future global citizens.

Here is the full article published in the Eastern Courier:  https://www.stuff.co.nz/auckland/local-news/eastern-courier/98024170/describing-kiwi-identity-in-two-languages 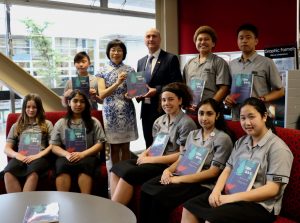