Many MHJC staff and students will be interested to view footage of training drills from CJ Lupena-Baker’s UK football tour, with the Westham Oceania Academy. During the second stage of the tour, CJ’s Team spent two days in Manchester before heading down to London, on the way they played Liverpool County FA winning 4-1.

They then had training sessions at Rugby Town, West Ham United and Wolverhampton Wanderers before attending the English Championship Game between Wolverhampton and Fulham at Molineux Stadium.  CJ reported that it was a thriller of game with the result being 4-4.

CJ’s team played their last game of the tour against Burton Albion at the National Training Facility, which they won 1-0. They then went on a bus tour of London, with extensive shopping taking place at the Nike and Adidas stores!  We are glad that CJ returned home safely from his overseas adventures and look forward to his continued success and enjoyment of football in 2017, and beyond. 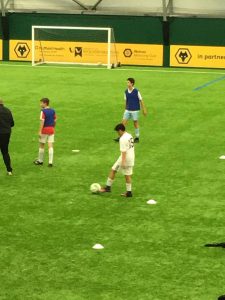